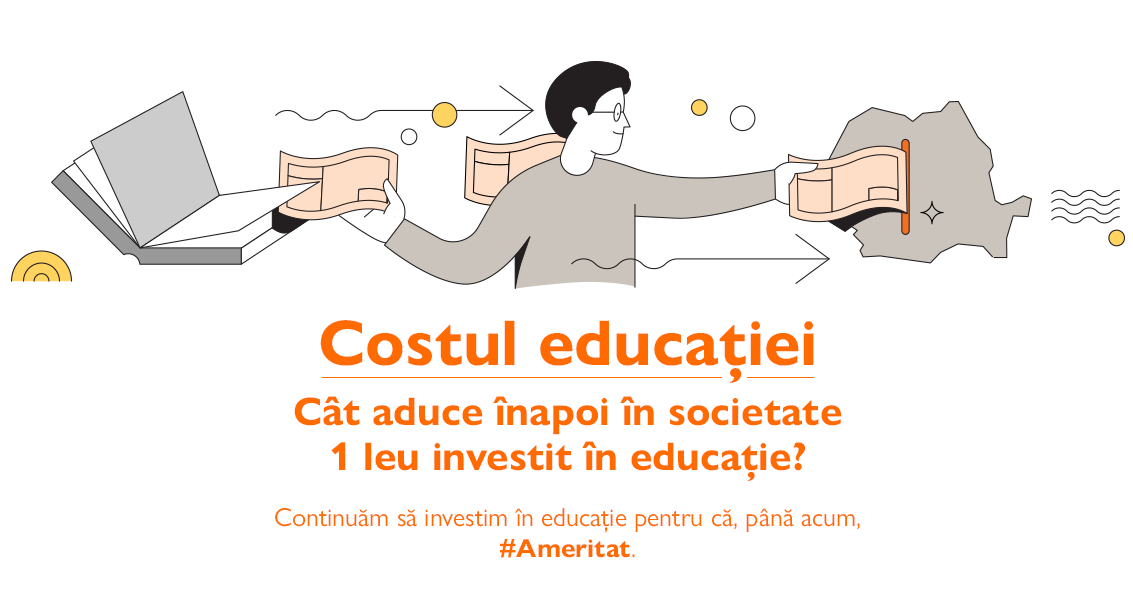 In one of Europe’s poorest countries, sagging public investment in education threatens the country’s future. A new report entitled „The Cost of Education: Investment, Yield, Impact”, published today and written by Deloitte Romania on behalf of the World Vision Romania Foundation, the local branch of the World Vision International partnership, shows just how misguided the lack of investment in education can be, and computes the actual losses.

According to the study, each Romanian leu (about 0.2 euros) invested in education returns about eight lei (2 euros) in taxes for each person that completes a postgraduate degree, for a yield of 700%. The aggregate lifetime tax contribution of a postgraduate degree holder is about 1.27 million lei (254,000 euros).

On the other hand, the state spends about 90,000 lei (18,000 euros) in lifetime post-education (financial aid and reskilling) for a single unemployed person that drops out after primary school. Adding the unrealized gains from income tax paid by the highest contributing individuals (postgraduates), the net resulting potential loss incurred by the state for each early leaver from education can run as high as 1,36 mil. lei, or 272,000 euros.

The Deloitte study also shows that Romanians’ gross income roughly doubles with each education level completed, from about 1,344 lei a month (270 euros) for someone with a primary-school education to 2,730 lei (546 euros) for a high-school graduate, and 5,465 lei (1,093 euros) for college degree holders, respectively. This is mirrored by a corresponding doubling in the amount of tax money paid to the state, since wages are uniformly taxed in Romania, with the various taxes making up about 46% of the gross wage for a salaried worker.

Romania has one of the lowest education funding per capita in the EU, says the report: about 936 euros annually for a preschooler, 1,106 euros for a primary school student, 1,398 euros for a secondary schooler, 1,317 euros for a high-schooler, and 2,139 euros for a college student.

According to official data not included in the Deloitte study, Romania has long underfunded its education system. Although the law requires the state to fund its schools to the equivalent of 6% of the country’s annual GDP, this provision of the law has never been enforced. Since 2011, all administrations have failed to reach that target.

This makes even more mystifying why virtually all Romanian administrations of the past three decades have chosen to ignore what is demonstrably one of the most profitable public investments.

School, including college and postgraduate education, is free in Romania, but is plagued by chronic underinvestment, high dropout rates (the third highest in the EU in 2020, behind Malta and Spain), lack of digital resources, an aging teacher workforce, and an exceedingly high proportion of underperforming students, according to the latest results of the OECD’s Programme for International Student Assessment (2018). About 41% of 14 to 15 year old students are considered low achievers in reading, and 47% in mathematics.

The Deloitte Romania report was commissioned by the World Vision Romania Foundation and is the result of desk research conducted in August 2021.

This website uses Google Analytics to collect anonymous information such as the number of visitors to the site, and the most popular pages.